Roman is a rugged defensemen who took to sled hockey because it reminded him of the hard-hitting football he played in his youth in Portland, Ore. Lee decided to don goalie gear because it brought back memories of playing net while growing up in San Francisco.

Neither man envisioned that they would become world-class athletes who’d be on the cusp of competing in the 2014 Paralympics in Sochi, Russia, this March. But neither of them envisioned losing a limb, a devastating event that can alter the trajectory of a person’s life. 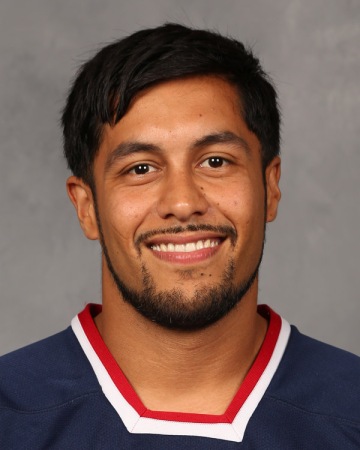 “I didn’t watch hockey, I don’t come from a hockey state, Oregon isn’t hockey country,” Roman told me recently. “Never did I know there was a Paralympic team. I never, never, never, never thought I’d be traveling and playing for the U.S.A. team.”

Hockey hurts: the vulcanized rubber puck that travels at speed in excess of 100 miles per hour always seems to find a section of unprotected flesh to strike and tooth-rattling body checks are jarring.

But hockey also heals, body and soul. And for Roman, 32, and Lee, 27, the game provided the right medicine at the right time.

“I think a lot of people thought, hey, our goal would be to try to walk again, or even run,” Lee told me. “Getting involved in this sport, to get out there, move around, play for the national team and represent your country and play all over internationally, it’s really cool.”

Army Staff Sergeant Rico Roman is the first war-wounded veteran to land a spot on the U.S. National sled hockey team. He joined the Army in 2001 after graduating from Alpha High School in Gresham, Ore.

On February 22, 2007, Roman was working his third tour in Iraq, finishing work at a security checkpoint that day at Sadar al Yusuf. He decided that his Humvee would lead the vehicular caravan back to base.

It was struck by an Improvised Explosive Device (IED) and the blast damaged both of Roman’s legs. The pain in his left leg became so unbearable that a year later he opted to have it amputated just above the knee.

While recovering at the Brooke Medical Center at Fort Sam Houston in San Antonio, Texas, Roman was approached by members of Operation Comfort, a nonprofit group that provided rehabilitative and therapeutic programs for wounded vets at the medical center.

The son of a Mexican-American mother and Puerto Rican father, Roman took up hand cycling, using specialized bikes for disabled users, and wheelchair basketball with competitive zeal. When Operation Comfort staffers suggested to Roman that he try sled hockey, he shook his head.

Once Operation Comfort staffers got Roman to the rink, they couldn’t get him out. He joined the San Antonio Rampage, a sled hockey team comprised of military veterans. He joined the U.S. National team in the 2011-12 season.“Once I got on the ice, I was hooked,” said Roman, a Purple Heart recipient.  ”I’m so happy they (Operation Comfort) did that for me. Now I do what they were doing; I go to Brooke Army Medical Center and I try to recruit guys to come try it out. And they tell me the same thing I said ‘I don’t play hockey, I don’t watch hockey.’ I go ‘I said the exact same thing you told me right now and now I’m on the Paralympic team heading to Russia.’”

Army Staff Sergeant Jen Lee is teammates with Roman on the Rampage and the U.S. Paralympics team.  He enlisted in the Army after the Sept. 11, 2001 terrorist attacks in New York, Washington, and Pennsylvania. Lee, 27, ended up at Brooke Army Medical Center after being involved in a motorcycle accident in 2009. His left leg was amputated above the knee. But the surgery didn’t dim his competitive athletic nature.

He embraced adaptive sports offered by Operation Comfort as part of his physical therapy regimen. His hockey experience as a kid convinced him to give sled hockey a chance.

“I couldn’t skate really well playing in-line, so I tried goalie,” he said. “When sled hockey came around, I had the same concept: I’m not great skating, I played goalie before, maybe it will be the same.”

Lee, who’s of Taiwanese heritage, quickly found a home between the pipes. He started playing for the Rampage in 2010. A year later, Lee was chosen for the U.S. National Sled Hockey team. He helped backstop the U.S. team to a gold medal at the 2012 International Paralympic Committee Ice Sledge World Championship and a silver medal at the 2013 world championships.

“I love it. I guess you’ve got to be weird to stop pucks, but I really enjoy it,” he said. “I’m the kind of person that f I play an away game I love to hear the crowd get upset that I’ve made a magnificent save or a great save.”

Lee and Roman said the most enjoyable thing about being part of the sled hockey team is the locker room. The Rampage team is filled with members of all branches of the military.”We clown on each other and make fun of each other,” Lee said. “We always find ways to get ourselves going, motivate each other. We all know what we’ve got to do to prepare. Go out there like it’s a battlefield, prepare your boys, train well. It’s almost the same thing except you’re not getting shot at…except for me, really. I’m still getting shot at.”